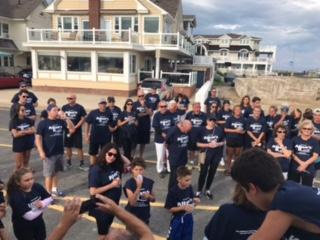 Donate!
Donate!
Help us get started by donating!
ALLAN'S WALK HAS REACHED ITS FINISH LINE! 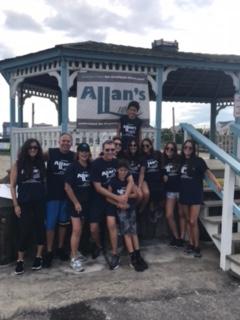 About Allan
Allan was a very healthy 74 year old man. He was an avid walker, swimmer, traveler, and a practicing dentist. He had a very full life with family and friends always around him. One morning in April 2012, a lump appeared on the side of his throat, and a week later he was diagnosed with anaplastic thyroid carcinoma. The news was devastating to our family.
He immediately begin radiation treatment at the Abramson Cancer Center, where he was given experimental medications as well. By the end of his radiation therapy, which he completed without the recommended tracheotomy and feeding tube, the primary tumor was noticeably smaller. Unfortunately, the cancer had spread to his lungs and there was no more that could be done. Allan died comfortably, surrounded by his wife and children. Cancer took him in only nine weeks.
His death was not only a terrible loss to our family, but also to his friends and patients who all loved him dearly.
It is time to fight back.
Anaplastic Thyroid Cancer (ATC)
Thyroid cancer is fairly common. The majority of cases (approximately 80%) are classified as papillary. These are treatable and have a fairly high survival rate. The anaplastic variety is very rare and accounts for less than 2% of all thyroid cancers. ATC is a very aggressive cancer and patients have a very poor prognosis, with statistics averaging survival at 2-4 months. By the time the main tumor is discovered, the cancer has likely spread. There is no treatment and surgery is not an option. There is no specific cause and once it is discovered, it is probably too late. Due to its rarity, ATC does not receive enough research money.
We need to change that.
Walk the Walk
After experiencing a life changing event such as the untimely loss of a loved one to a devastating disease, it is important to do something to prevent others from having to endure such pain. We have decided that the best way to keep Allan's memory alive is to honor him with this event. Every dollar that is raised will go directly to the Abramson Cancer Center and used for anaplastic thyroid cancer research and treatment. It will be a long road, but a fulfilling one. Help to understand the diagnosis and defy the prognosis.
Please walk with us!
Sandi,
Howard, Abby, Steven, Rachel, Andrea,
Ally, Dara, Amanda, Ilan, Dylan, and Asher
Registration
You may register as a single walker or by family. The registration fees below are suggested minimum amounts; you are welcome to contribute more. Please send the names and t-shirt sizes of the members of your group to allanswalk@hotmail.com.

Sponsorships are available: (sponsor deadline to appear on t-shirt: 8/4/17)

Beach Level: includes 4 walker registrations, name or logo on the t-shirt and listing on the website.

Boardwalk Level: all of the above with a larger name or logo on the shirt, and the opportunity to place a promotional item in the Allan'sWalk gift bag.

Sponsors should list the names and ages of participants in their group in the remarks section of the donation page.

Please e-mail us at allanswalk@hotmail.com if you would like to be a sponsor.